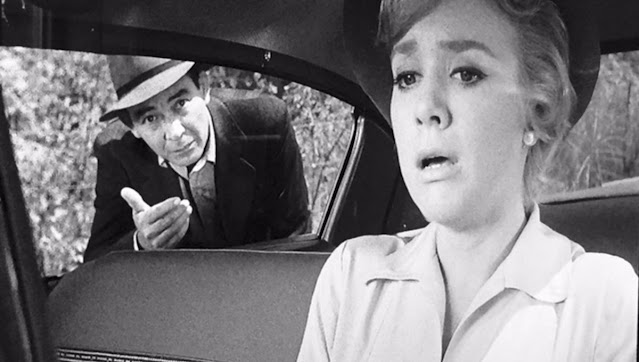 I stand before you as a man who’s been arrested, charged, prosecuted and found guilty of

being a pedestrian. Admittedly I was a pedestrian on the hard shoulder of a motorway, and

it’s a long story but it was a fair cop.  I went quietly.  Hitchhiking was involved, as was the

style at the time.  I’ll spare you the rest of my ‘hitch-hiking stories.’

Now consider the case of Hassan Mansoor Mohammed Ameen who was found walking in the middle of a busy road at the junction of Esplanade Drive and Fullerton Road in Singapore in August 21st, causing cars to slow down or stop.

It seems like one of those stories you can never quite get to the bottom of, but it sounds as though the police tried to arrest him or at least get him off the road but he resisted.  Complications ensued. 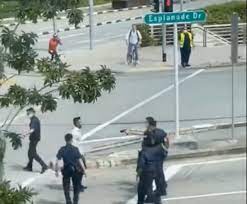 The following account comes from the Singaporean website Stomp,  ‘The officer told Hassan he would be placed under arrest if he did not move off the road. When he did not comply, the officers called for backup.

‘After another four officers turned up, Hassan continued to ignore instructions to get off the road.

‘Director of Public Prosecutions Iranian said: ‘The accused also adopted a fighting stance at one point, shouted repeatedly and told the police officers that they were fake police officers.’

‘When they tried to arrest Hassan, he behaved aggressively and swung his hands wildly. He pushed an officer on the chest and swung his right arm and hit another officer on the right side of his face. Another officer then tasered Hassan.  He fell down briefly but managed to get up and remove the probes from his body. Hassan then punched one of the officers before running off against the flow of traffic with the officers in pursuit.  When they caught up with him, Hassan, who had taken off his top by then, continued to resist arrest. He was finally arrested after being tasered again.” 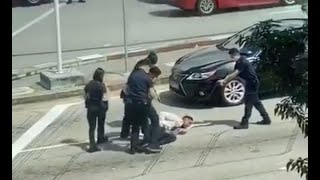 Well, that sounds like a lot of unnecessary bother, doesn’t it?

Hassan eventually had his day in court, and copped to everything. He admitted disorderly behavior, using violence on police officers, two counts of voluntarily causing hurt to deter public servants from their duties, one count of behaving in a disorderly manner on a public road, and one count of consuming methamphetamine. He was jailed on 30 December 2021, sentenced to one year and 29 weeks in jail.

The prosecution said he’d been taking meth weekly because he was 'bored and stressed about his personal life.'  I have no idea what the defense said.

Well dude, going for a walk is a great way of alleviating boredom and stress, but not always a complete solution, obviously.  As I recall I was fined 5 quid for my illegal motorway walking, though it was in the days when 5 quid was worth something.

Posted by GeoffNIcholson at 11:55 AM No comments:

ABIDE WITH ME, ETC

Here’s a picture of an old feller walking in Sheffield. 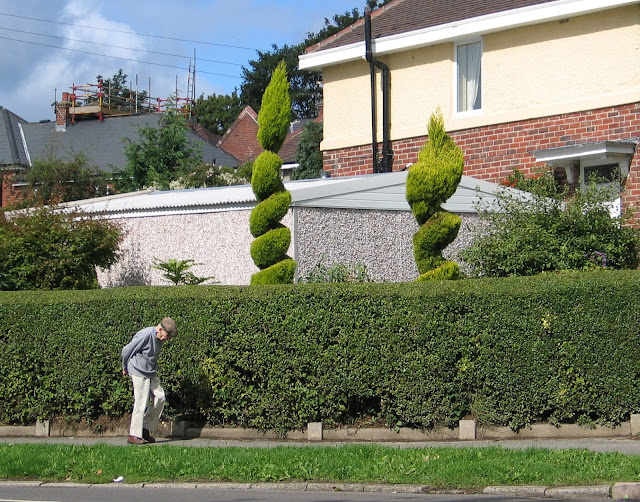 I took it about fifteen years ago when I was walking around the old neighbourhood where I grew up.  It’s taken at the corner of Crowder Road and Crowder Crescent, and I’d have said it was on the Longley Estate, but it could be the Southey Green Estate: these things are finely nuanced and I’ve been gone a long time.

I don’t make any claims for myself as a photographer but I’m rather pleased with this one: the twisting of the trees contrasted with the bending of the old man.  (Are they trees? I suppose they may be bushes or shrubs, but never mind). And for one reason another I decided to take a look on Google Street View to see what had been happening on that corner. This view, dated 2021, shows that the twisty trees are gone. 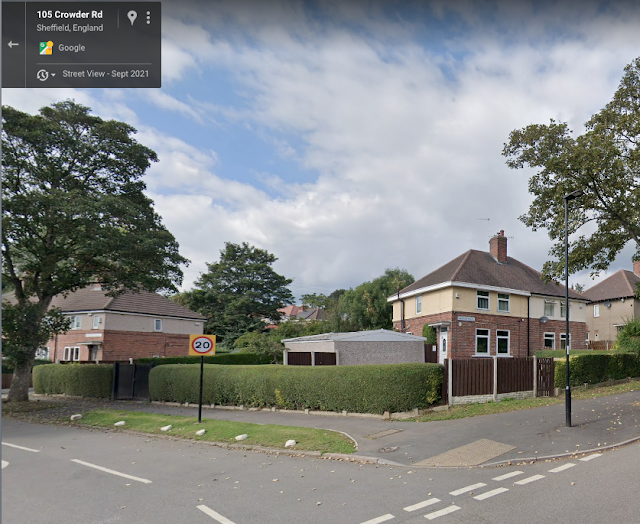 What a sad thing.

However, if you let Street View take you into the side street, Crowder Crescent, they’re still there.  They’re not looking as healthy as in my pic but they’re hanging in there.  But that picture is dated 2012. 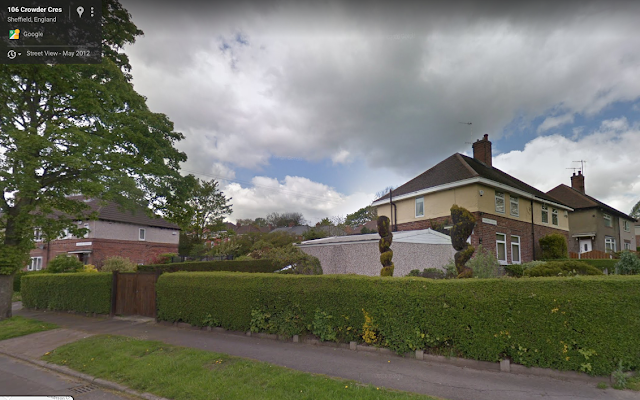 So we can say that somewhere between 2012 and 2021 those trees were either removed or possibly they just died.  It seems a sad thing but it may be nature taking its course.

The old man, I assume, is long, long gone.

Posted by GeoffNIcholson at 11:12 AM No comments:

If you walk down the high street of Manningtree at the moment, you'll see this, part of a

building that's being worked on: 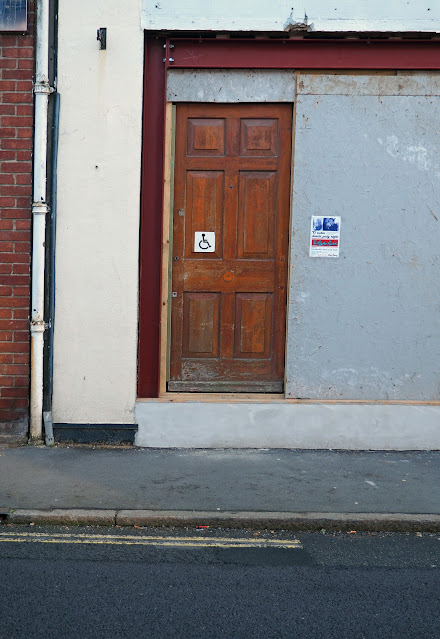 It’s a door marked for wheelchair users that’s about a foot off the ground – no ramp, no lift. Getting in of course is impossible, but getting out would be a wild ride.  The door opens, the wheelchair passes through and the occupant is (briefly) airborne.

I don’t honestly think this is a Thomasson – i.e. a surviving architectural relic that serves no purpose but by some kind of alchemy has become a work of art, or hyperart.

Nah, I think the guys working on the building just needed a door, any door, to plug up the hole and the one they found happened to have a wheelchair sticker on it. And maybe one of the guys likes a larf. I expect it’ll soon be gone.

If you happen to be walking in Ipswich, up in the next county, you might come across this place: 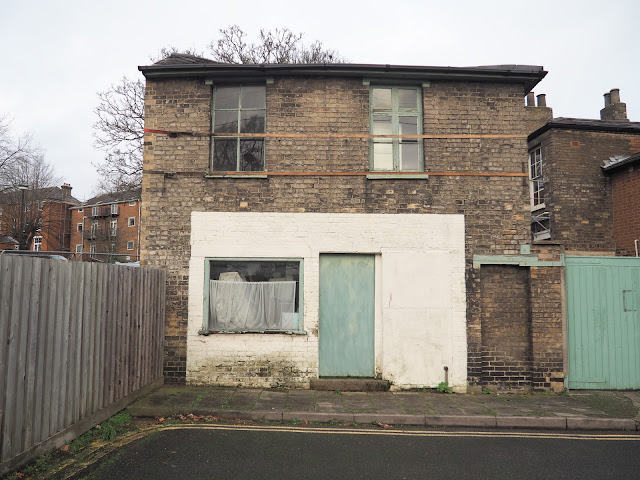 It’s closed up and one of the doors is bricked up, and again not a Thomasson, just a way of securely plugging a hole. But what really catches the eye is that belt arrangement that appears to be holding the house together. 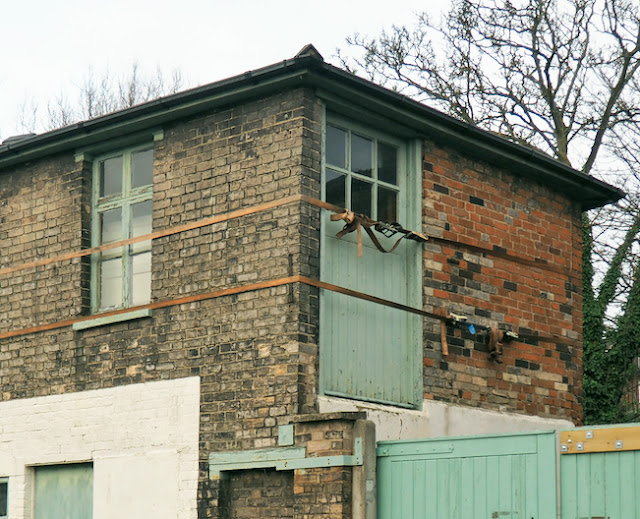 I’m sure there must be a technical architectural term for those belts, and perhaps it’s a tried and trusted method.  Even so, the house owner, and the builder, evidently have more confidence in the belt materials than I would have, especially if I lived in the house next door.

Posted by GeoffNIcholson at 2:29 AM No comments: 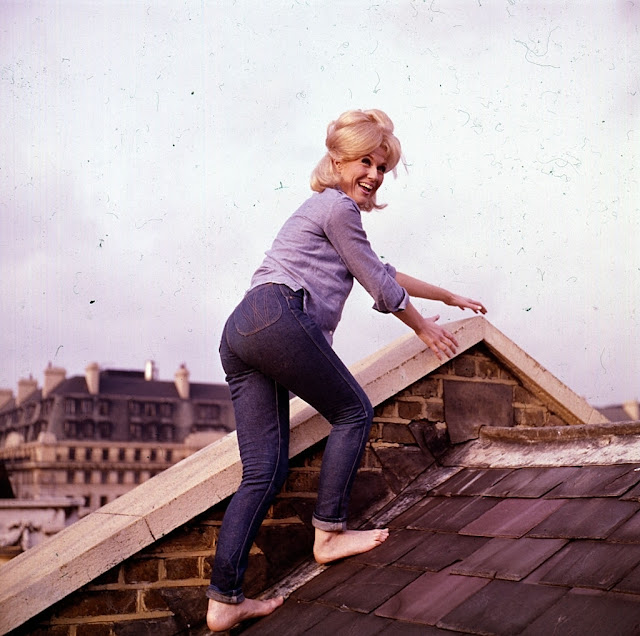 For reasons we needn’t go into, I was thinking about Dusty Springfield.  I looked her up on Wikipedia and found this sentence; ‘She enjoyed reading maps and would intentionally get lost to navigate her way out.[11]’  Now there’s a thing.

In the article you’ll find this, ‘DUSTY SPRINGFIELD LOVED MAPS. She liked to curl up in bed with an atlas and could follow a road map with a navigator's elan. "She was a good person to be lost with," her longtime friend and manager Vicki Wickham has said.’ 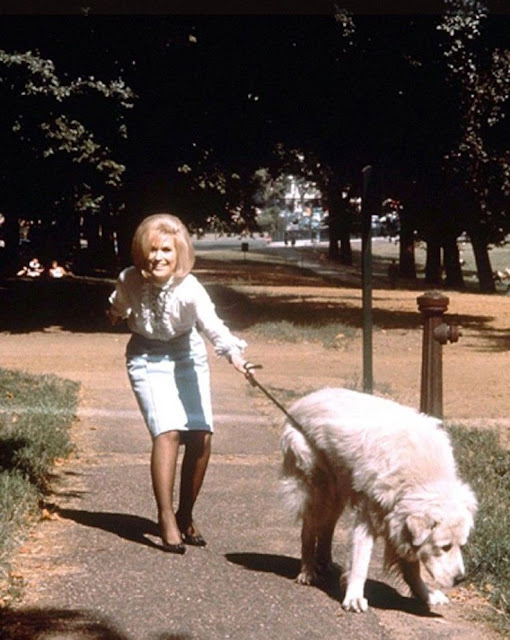 Do navigators display elan?  Not the ones I've met, but let let's not argue,  The article continues, ‘Perhaps the certainty of maps, with their solid boundaries and clearly marked destinations, comforted a woman who had to carve her own path through the pop-music jungle for nearly 40 years.’ 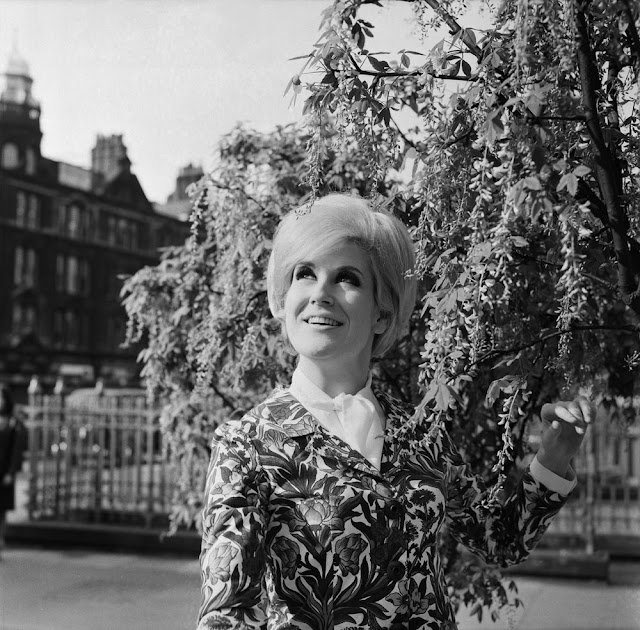 You see, I don’t think you have to be a psychogeographic theorist to realize that most maps DON’T contains certainties, solid boundaries and clearly marked destinations.  Many of them are incredibly inscrutable.  That’s one reason why we like them.

And then the Advocate article completely loses its way, ‘But while living in Los Angeles she seemed to misplace her atlas, maps, and all sense of personal geography. America had seemed like a dream to her, but it bred nightmares too.’ 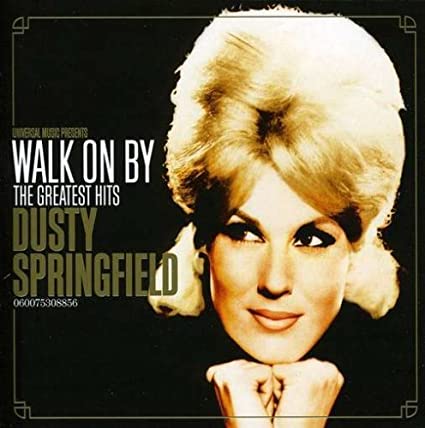 I can’t tell you whether Dusty was much of a walker.  The pictures scattered around this post suggest she did do a certain amount of walking, in parks, with dogs, on roofs, and it’s worth noting that one album of her greatest hits was called ‘Walk On By’ – make what you will of that.

Posted by GeoffNIcholson at 5:21 AM No comments: 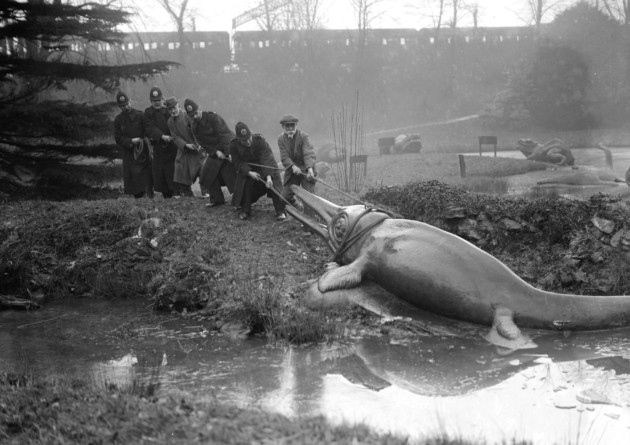 When I was a stripling, living in Sheffield, most of a lifetime ago, I was a great fan of the

band Cream, so much so that I was a member of their fan club, which was called Cream

Addicts Anonymous.  At the time, the drug reference went over my head.

I’m pretty sure it was organised by the band’s management, The Robert Stigwood Organisation, but the newsletters were written by someone called Anne Hartzen and it all felt quite homely.  And so since I was just starting to play guitar I wrote to the fan club and said ‘I’m trying to work out the chords to “I feel Free,” can you help me?’

FYI, 'I Feel Free' does contain the lyrics, ‘I can walk down the street, there's no one there/Though the pavements are one huge crowd ..’ - but that’s not what drew me to the song.

In a perfect world Jack Bruce would have scribbled the chords on the back of an envelope and sent them to me, but in fact I received the sheet music, which looked (and still looks) like this: 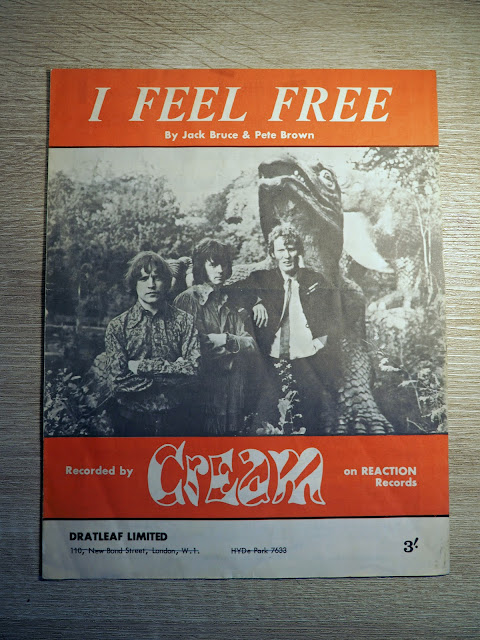 I was knocked out by the photograph on the front – which (I now know) shows the band in front of the dinosaurs of Crystal Palace Park (there are 2 dinosaurs in the picture but you can only really make out one) – though I had no idea of that at the time, and it took a couple of decades before I found out.

It was even longer before I went and walked round Crystal Palace Park and its dinosaurs, which in fact I did last week.  I wish I’d gone sooner.  It was a great walk: chilly, bright, muddy, and the park was full of runners and people with dogs and babies.  The dinosaurs weren't hard to find: 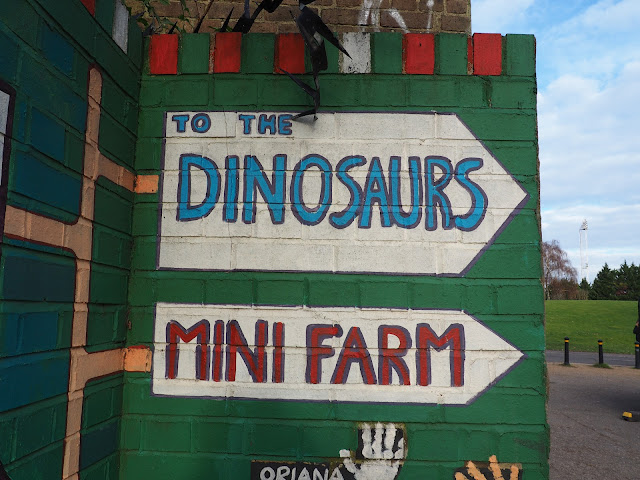 And the pavement was not one huge crowd.  And I saw the very dinosaurs that the band were posing in front of.  These ones, though very much not from the same angle. 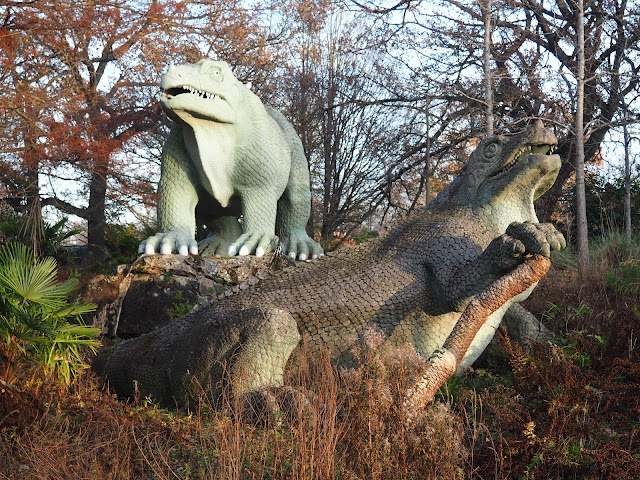 The band got much closer than I could; they’re standing on an island right next to the beasts, but that area is now out of bounds.  I don’t know whether the dinosaurs were more accessible back then or whether the band got special permission because they had a photographer with them.  And I’ve not been able to find the name of the photographer.  Can anybody help? 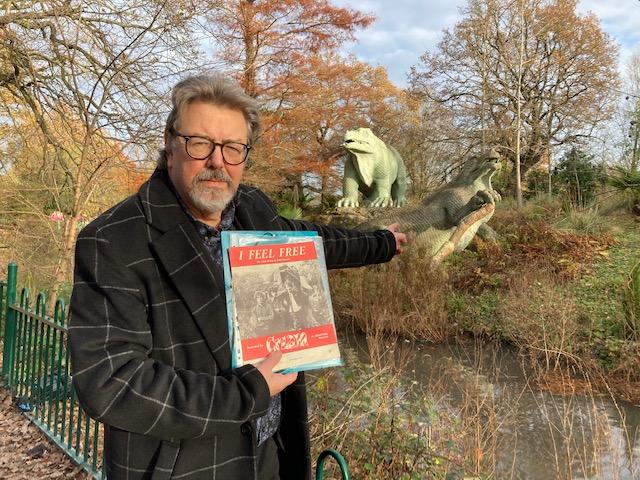 And OK, I admit that Cream were not actually going for a walk in Crystal Palace Park, though I guess they must have done some walking to get to the dinosaurs.  So here’s a picture of the lads walking elsewhere.

NB - I did eventually own and wear a fringed jacket but (obviously) it wasn't as cool as Eric's. 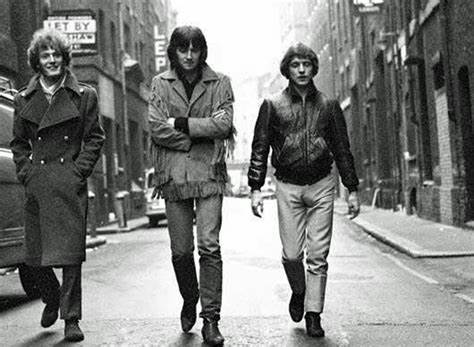 Posted by GeoffNIcholson at 5:53 AM No comments: